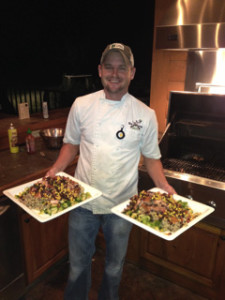 Chef David Crews got his culinary start in 1997 at The Airport Grocery in Cleveland, MS. He started out thinking of it as a job, which turned into a career, which evolved into a love affair with food. He later went to work for KC’s in Cleveland, and got a taste of fine dining. This finalized his desire to dedicate his life to food, and he enrolled at MUW’s Culinary Arts Program. While he was in school Chef Crews worked under the late Chef Joseph Broussard at J. Broussard’s in Columbus, MS. He credits Chef Broussard for teaching him about New Orleans cuisine and how to manage a kitchen. Chef Crews graduated at the top of his class from culinary school. After college he went to work for Viking Cooking School and helped open their hotel, The Alluvian.

He took some time off to get married and start a family, and then Chef Crews started Crews Culinary Investments, a private dining and consulting business. The events that Crews Culinary Investments were producing got Chef Crews hired at Crawdads of Merigold in 2005. He helped lead the crew at Crawdads to numerous awards such as Best Restaurant and Top 5 Steakhouses in Mississippi.

In 2008 Chef Crews became an instructor at Mississippi Delta Community College in their Culinary Arts Program. Along with working at MCDCC, Chef Crews also serves as the Executive Chef of Six Shooter Land and Timber, and personal chef to 3 Mississippi families.